I consider research assistantships an integral part of my teaching responsibilities.  Mentoring promising undergraduate and graduate students in advanced research techniques is a time-consuming, but rewarding activity.  It requires that I ask not just what an RA can do for me, but what and how I can contribute to an RA’s academic development.  Identifying appropriate research tasks that evolve as an RA develops new skills is challenging and interesting for both mentor and student. 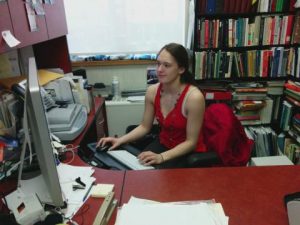 The faculty researcher must take time to explain what needs to be done, as well as why and how a research technique is employed and what the RA’s contribution will mean for a larger project.   At the same time, I always encourage assistants to provide constructive feedback and to suggest ways to improve processes.  I am pleased that most of the undergraduate RAs with whom I have worked most closely have won SSHRC scholarships and other prestigious awards to support their graduate studies.

I strive to create opportunities for exceptional RAs to co-present or co-publish findings with me.  Examples of publications include:

“Sovereignty and Security: The Department of External Affairs, the United States, and Arctic Sovereignty, 1945-68,” in In the National Interest: Canadian Foreign Policy and the Department of Foreign Affairs and International Trade, 1909-2009, ed. Greg Donaghy and Michael Carroll. Calgary: University of Calgary Press, 2011. 101-20 (with Peter Kikkert, M.A. student, University of Waterloo.)

“Damned if they DEW, Damned if they Don’t: Canadian-American Relations, Sovereignty, and the Construction of the Distant Early Warning (DEW) Line.” Paper delivered at the Tri-University Conference in History, Waterloo, Ontario, November 2007 (with Dan Heidt, M.A. student, University of Waterloo).